About the Free City of Leslieville

This is a site about Leslieville, a district in South Riverdale, Toronto. It’s where I’ve lived for nearly five years, and in that time Toronto has enjoyed a revival of discussion about itself and what it has to offer, as opposed to how it’s inferior to New York or some other American city it masquerades as in imported movie and TV productions.

That discussion – in Spacing magazine, in Utopia, in newspapers, in Weblogs – is the best thing to happen to Toronto in easily the last decade, but it’s already turned into a kind of style. You could pretty much write a Spacing-type article in your sleep at this point, and those articles are easy to parody. The Spacing-type discourse is mostly about west-end neighbourhoods, like the Annex and Parkdale, that are popular among University of Toronto graduates, artist types, intellectuals, and young countercultural leftists. I don’t live there, but I still live in Toronto, a distinction that seems lost on these new Toronto boosters. They claim to want to understand Toronto for what it really is and to improve the city, but their Toronto doesn’t include me and my neighbourhood.

These boosters do a kind of masquerading of their own – instead of Toronto standing in for Manhattan, we’ve got the Annex and Parkdale standing in for Toronto. It’s a consequence of Toronto’s celebrated status as a city of neighbourhoods. These people are simply never going to bother crossing the Don River to understand the east end, because their beloved neighbourhoods give them nearly everything they could wish for.

But Leslieville gives me nearly everything I want. And while I’d like to see the whole city improved, when push comes to shove, I want my hood at the top of the list, because it has a history of neglect that this new Spacing-type intelligentsia perpetuates. I support what the Spacers are doing in principle, but if they want me to support them in practice they’re going to have to admit I live in the same city they do. If they want me to help them understand and improve Toronto, they’re going to have to admit I actually live there.

This site is a personal compendium of writing and critiques of Leslieville, South Riverdale, and the east end in general. It’s a response to neglect. It is written and photographed primarily by Joe Clark, with occasional outside contributions. It is not a blog or community site or forum of any kind; you cannot post your own words and pictures on the site, and that is by design.

I’m Joe Clark and I live in Leslieville. (See my personal and business sites.) I work from home in a range of obscure technical fields. I am known in those fields around the world and travel widely, but I am always pleased to realize that I’m doing that work and developing that reputation from the dilapidated little neighbourhood I call home. 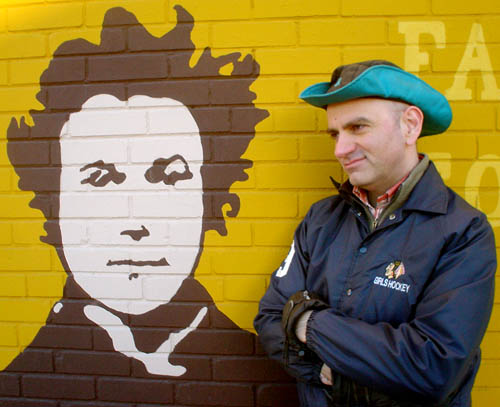 I’ve lived east of the Don River for nearly the entire time I’ve been in Toronto, where I moved in 1987. I’ve lived in Riverdale, Parkdale, and right downtown. I have ended up here and by God I’m staying. I have come to understand the pros and cons of the neighbourhood. I have gotten used to it, and I rather like it. In fact, I am fiercely protective of the place. As I like to say, Leslieville is a place where you never have to feel eccentric. If you see me around, say hello.

I don’t do much in the way of activism, though I am nearly the only independent source of information on the proposed Foundry District development.

Ian Beanlands, an architectural designer who does housing additions and renovations, is my only friend with architectural training (by attending Carleton’s School of Architecture). He lives way the hell out in Spacingland, but has come to know my neighbourhood a little – just enough to appreciate the reality of its housing stock and to comment on it intelligibly. 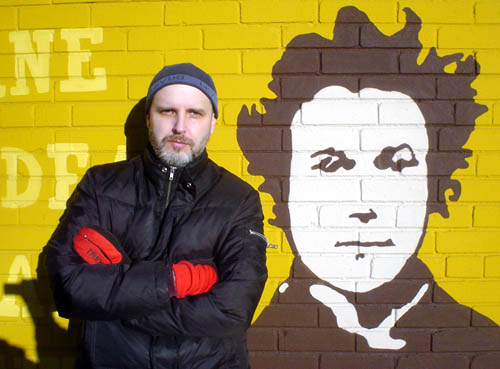 Now, just what does “the Free City of Leslieville” mean, and where does it come from? It’s lifted wholesale from William Gibson’s Johnny Mnemonic, which takes place in the Free City of Newark. The impure part is this: You find that phrase in the movie, not the book. (The movie is a bit of a mess, but it does have the value-adding features of a well-imagined 3D haptic interface and Henry Rollins pretending to be a doctor in an outdoor triage unit in Mel Lastman Square.)

I doubt you were really tempted to do so, but do not take the phrase literally. Leslieville is not now and never will be a free city of the sort that Westmount will become once it separates from a sovereign Quebec. It would be difficult to draw the borders of a Free City of Leslieville in the first place, since Riverside, Leslieville, the Studio District, and other regions with and without name, all blend into South Riverdale.

“The Free City of Leslieville” is meant as an ideal or a positioning statement. It says to the unfashionable old generation that ignored us, and to the fashionable new Spacing/Utopia generation that does the same thing, that we can ignore you, too. We don’t particularly need you for our day-to-day lives, since our neighbourhood is very nearly complete unto itself. (If you don’t have to commute downtown to work, you never actually have to leave.)

Technical information about the site

This site is laboriously hand-crafted and complies with Web standards, meaning all its underlying coding is grammatically correct. Pages are written to valid HTML 4.01 Strict and CSS.

What this means is that any browser should be able to function adequately with the site. Browsers that work well with standards-compliant pages – like Safari, Opera, Mozilla, and Firefox, among others – will work particularly well.

...the site works fine but doesn’t look as nice. Consider upgrading to one of the free alternative browsers, like Opera or Firefox. (Just the convenience of tabbed browsing will more than make up for a couple of minutes’ downloading time. Every alternative to IE/Windows is safer, too. The best thing you can do for your own use of the Web is to abandon Internet Explorer.)

The site was tested, and works adequately or very well, in:

The site was not tested in IE5/Win or Netscape 4 and isn’t going to be. You have no excuse for using those outdated browsers in this day and age; upgrade.

Page layout converts to single-column if you increase font size. This may later be remedied by adding a zoom layout.

Graphic design and code are adapted, with permission, from a demonstration site by Roger Hudson and Russ Weakley. Antonio Cavedoni, Roger Johansson, Richard Rutter, Anne van Kesteren, and Derek Featherstone all assisted with CSS, which perhaps indicates a problem.

Any technical deficiencies you note with the site can be reported, but are probably there because my friends and I couldn’t fix them. This site is already vastly superior to any other neighbourhood site in existence. How many lower-middle-class neighbourhoods with lead-contaminated soil have HTML Strict fan Web sites with RSS?