2009.03.06
Yes, it's been a while. Anyway, the OMB ruled against Smart Centres in its application to redevelop what used to be known as the Foundry District. We’ve got the OMB decision in easy-to-read format for you.
2008.10.30
Mention in the Tubby. More about the photo shoot. (We did it behind the Hell’s Angels!)
2008.01.09
Final mop-up of social-housing reviews is going to have to wait until we reshoot our photographs; the ones we have are terrible. Look out, 436 Leslie, 444 Logan, 52 Jones, and 197 Logan!
2007.12.30
Architects’ Houses of Leslieville (for real).
2007.11.15
This site is beginning to feel abandoned, for which we apologize. Upcoming: Architects’ Houses of Leslieville.
2007.09.21
Notes from a public meeting about the big-box plans, held at Riverdale Collegiate Institute.
2007.08.05
There’s a proposed building at Connaught & Eastern. At least it’ll be better than what we’ve got now – but really, even more buff brick? (Now with new pictures and architectural renderings)
2007.07.10
Doing Jones. 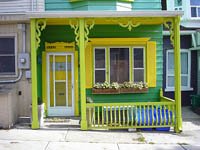 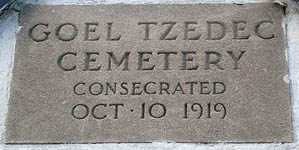 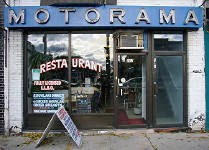 2007.05.18
On 2007.05.17, Paula Fletcher hosted a public meeting about the latest incarnation of the Foundry District plans, which are now all big-box all the time. I attended and took notes. (Photos of architectural drawings)
2007.05.11
They destroyed the unique and charming Tudor façade at 123 Coxwell. What does it look like now?
Incidentally, we aren’t dead, and since it’s the springtime, we’re starting up again.
2007.04.08
Well, the Hell’s finally got raided, and You Are There!
Also, our travelogue up Jones is still undone, though the pictures are all in place. Nor have we completed our trip around the littler buildings that didn’t warrant their own pages. Essentially, we took the winter off. This mustn’t be interpreted as giving up on the site. Life begins anew in the spring, does it not?
2007.01.09
One Year in Leslieville: Reflections on our first year
2007.01.05
Next week is our anniversary. No promises that we’ll have the final social-housing reviews up and done. Of course they’re overdue; this site, like all Sisyphean personal projects, has fallen somewhat into desuetude.
2007.01.03
I met Joe Fiorito of the Toronto Star for coffee at the Lesliebucks, which finally resulted in a column of his (blog response)
2006.11.21
A blond operative outside the Lesliebucks – stacked to the ceiling with boxes and furniture, with guys installing blinds in the windows – is due to open this Friday, November 24. Be there or be “ungentrified”
2006.10.04
OK, we’re packing it in with Housing the Proles of Leslieville. But we’re going out with a bang: We’re gathering up the odds-’n’-ends buildings we haven’t reviewed yet and running them in one big post, coming up shortly. Then we move on to the rich people’s housing. Oh, and did you know I snapped some photos inside the Lesliebucks?
2006.09.10
Jones, a teaser for an upcoming feature (2006.09.10)
Main-navigation colours changed to match those on the Alexander Muir mural (also the backdrop to the contributor photos)
2006.08.30
New building critiqued: 66 Walpole, our first real ghetto
2006.08.28
This week for the Walpole review, we hope.
2006.08.13
Yes, the Lesliebucks really is happening. And yes, we’ve got another building review coming out this week
2006.07.18
Finally it’s done: 1050 Queen.
2006.07.12
OK, we’re still slow, but there’s good news: We’re getting a tour of 1050 Queen! Yes, soon we’ll be able to provide superspecial, A-list insider information on this leviathan. In the meantime, we’re gonna run a review of 66 Walpole, out this week.
2006.07.03
We’re slow on the next building, 1050 Queen, for two reasons. Carl told us about the history of the building they tore down to install that one, with, apparently, an Art Deco façade; we’ve been trying to track down photos, but nobody’s helping. Also, we got an offer to do an inside tour of the place, which we’ll be doing this week. I suppose we could write a placeholder piece in the meantime. I certainly don’t want a month to pass without an update again.
2006.05.28
Leslieville Signage Phenomenon: Why do so many wee tchotchke shops have the same twee signage?
2006.05.25
New building critiqued: 791 Queen (Fontbonne Place), quite a successful little site all told
2006.05.08
New buildings critiqued – the other two buildings at the strange corner of Coxwell and Robbins. 123 & 131 Coxwell: Tudor and stucco, together at last
2006.05.06
A Starbucks in Leslieville: What, me worry? There’s a Starbucks opening at Queen and Logan. Relax, people!
2006.04.23
Ian has been impossible to schedule (despite efforts) and I have to get ready for a trip to Iceland, so another housing review is going to have to wait. Yes, this means a month will have passed without an update, but no, it does not mean we are giving up the ghost.
2006.03.27
New building critiqued, and it’s on the worst block in Toronto: 502 Eastern, two doors down from the Hell’s Angels. (May I borrow a cup of sugar?)
2006.03.20
And lo did it come to pass: Exactly as with any other self-directed, unpaid bloglike project, posting frequency decreases. Ian and I are now promising nothing more than several new housing critiques each month. We enjoyed the last one and are raring to go and have lots of photos already taken. We just don’t want a rigid schedule anymore. At least three pages on this site (plus the RSS feed) will keep you informed. Drop back occasionally
2006.03.14
Yeah, we took a week off. Might be doing that more often, actually. In any event, this week, 802 Eastern, an ugly, sagging building smack dab on a dangerous corner. Our worst building yet, in fact
2006.03.02
New buildings critiqued: 137 Sears & 29 Louvain. And there I was thinking they were twins
2006.02.20
2006.02.13

The strangest social-housing project in South Riverdale, the postmodern Maddy Harper Lodge, goes under the microscope. Surprise – we like it

Yes, that is the Free City of Leslieville you read about on page M5 of today’s Globe and Mail (not online). I was somewhat heavily paraphrased by writer Nicholas Dinka, with only mild change in sense (I don’t “love” the book Utopia; I’ll be “going after” upper-middle-class people, not the nonexistent “rich”), but, on the whole, not bad for a wee neighbourhood site

New author photos on the About page and homepage

Well, I got my first hate mail from Matt Blackett of the Spacers yesterday. I conclude that the Spacers find it unimaginable that any criticism of their work could come from a domain other than corporations or the world of advertising – that someone who supports their general project could still have objections. Poof! There goes one’s dream of appearing onstage at the next forum on West Queen West

After weeks of effort, the site launches

Coverage by Weisblott at Paved