If you read enough articles about Leslieville, a term you will have to get used to is “gentrification.” According to writers who haven’t actually examined the neighbourhood, the gentry are moving in – or at least people richer than the original residents. These new arrivals do nothing to upset the residential balance of Leslieville – there are just as many people in social housing as before and just as many getting by in ancient row-house shanties that are crumbling and leaning into each other. Something we are witnessing, though, is the rise of architects’ houses.

The term is inexact, as only one of the houses here is known to be inhabited by an architect. (We mailed letters to occupants of all houses asking for tours and interviews, but none responded before press time.) In practice, architects’ houses are ostentatiously different from their neighbours. They don’t fit into the general morphology of the neighbourhood – and wouldn’t even fit into a neighbourhood built of nothing but architects’ houses, since none of them would match. There’s a trend toward modernism, an excess of scale, and unusual surface treatments.

We know of four in Leslieville, plus an honourable mention. 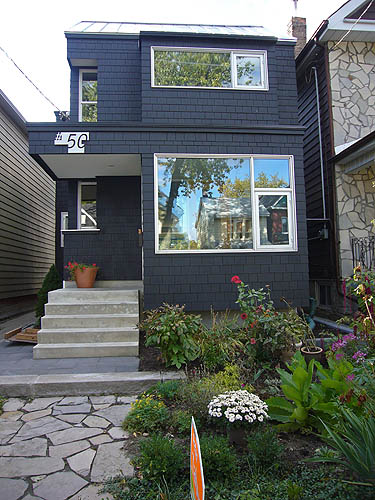 With a sooty-black exterior that looks like the result of a fatal house fire, the house seems uninhabitable. It also seemed uninhabited for months, with no lights on and no furniture – but always with a custom-cut number plate that attempts to quote Emigre typefaces from 15 years ago (though the numerals more resemble Trade Gothic). 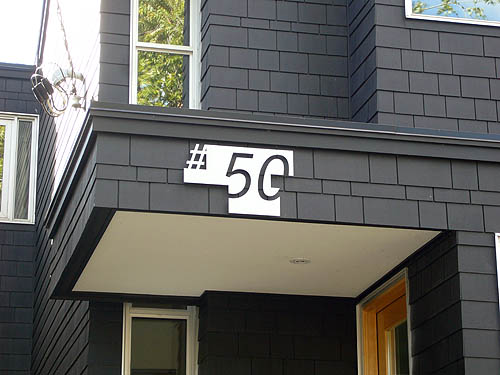 Now, though, there’s an occasional fine vase of flowers in the window of the front room, which still looks like it never was or will be occupied. The front garden has been tended. More importantly, the residents, Garth Norbraten, an architect, and “partner” Greg Lichti – seem to want to be known as the house’s owners or else they wouldn’t have been showcased in an article in the Globe. There’s no banister on the front steps – and nothing to hold onto once you climb them, either, as the landing is columnless. (That’s something of a trend on Hastings, as we’ll see.)

There is an impression of inset and extruded rectilinear volumes, as if the result of a computer animation. (“Let me show you what your house could look like.”) It turns out the front elevation hides an angled roof on the rear, something mirrored by another angled roof at the back of the house. 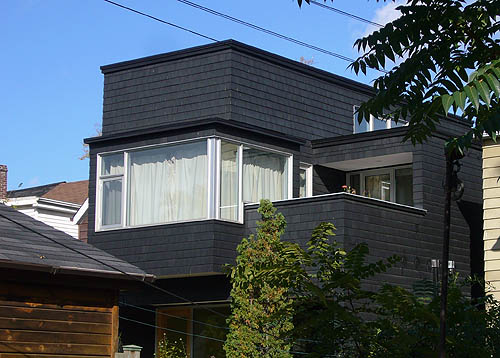 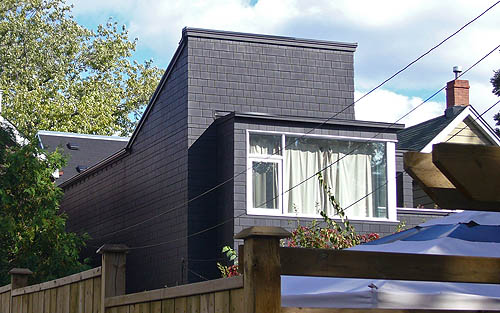 If it were possible to view the house in profile, its roof would resemble a low-resolution pixelated saddle.

In its street context, 50 Hastings makes one and a half statements – one from its form and half from its finishes. A house that looks like this more honestly wants to be a weird colour, like the krazy kube houses at Leslie and Bond in North York. But if that were the case, the burnt-looking shingles would have to be smoother; given the other local examples, that would be a disaster. 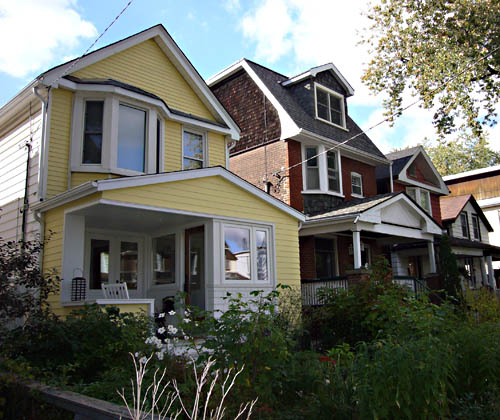 Twice as far up the street you find half the daring, but it works. A typical house typology complete with bay window, 100 Hastings was modestly renovated to remove a column from the front porch (a make-or-break detail) and introduce a well-chosen and sympathetic paint colour, butter yellow. You could drink mint juleps on this veranda, but they’d be served in rectangular glasses à la Star Trek. The intentionally overgrown front lawn seems more like landscaping and provides a pleasant contrast in texture.

The house conceals its real action out back, where the effect is of an unremitting yellow slab with white recesses (also corner-columnless). The tiny window at top left, adrift in a too-large surround, seems insufficiently planned. Look closely and you’ll see that the south wall is white siding, not yellow, which looks like another oversight. 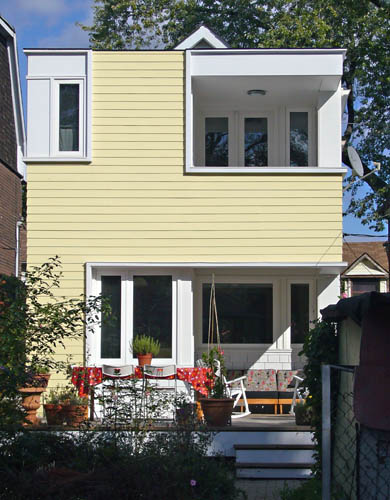 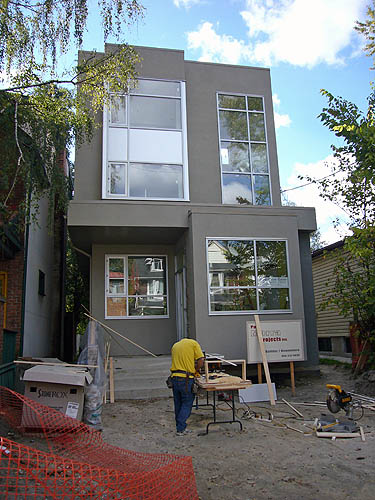 Yes, we’re still on Hastings – in fact, we’re between the first two houses in this list. This monstrosity is modernism from a kit, the kind of architect’s house whose plans you’d buy out of a magazine. Oversized for the property and finished in drab stucco, there’s a long list of mistakes – the massing, the complete domination of the small lot, the offensively bland stucco finish, the ill-chosen, overlarge windows, and the unnecessary ridging at the top of each plane. Even the lack of corner column on the front landing doesn’t work.

This isn’t a house, it’s a gesture of contempt that somebody will eventually move into. These aren’t the kind of people whose door you should knock on if you need to borrow a cup of sugar. One of its neighbours is already cowering in fear. 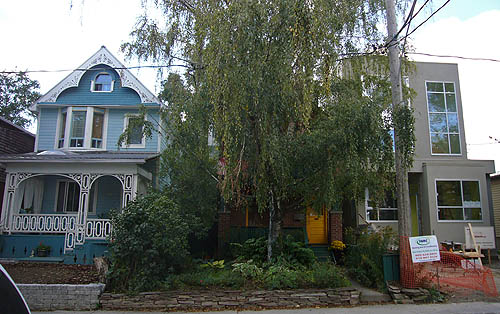 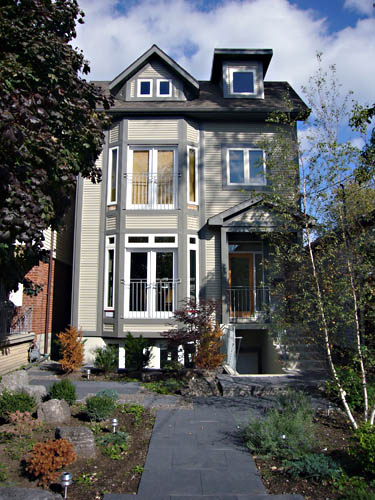 This one’s also from a kit, uses ugly siding in some colour that doesn’t manage to be beige or grey, and combines belt and suspenders with its Juliet-balcony-equipped bay windows.

The only reason it doesn’t seem overlarge is the presence of a basement apartment. Its uncomfortable sets of steps at the entrance are an unergonomic steeplechase of Upstairs, Downstairs. 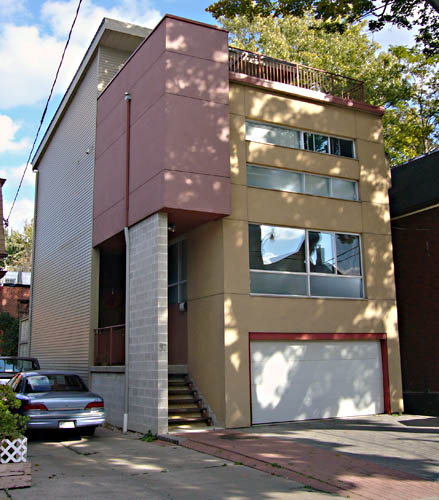 Meanwhile, in another part of the neighbourhood, this arrogant colossus, straight out of a metal shop, attempts to dominate and crush the puny wooden cottage next door. 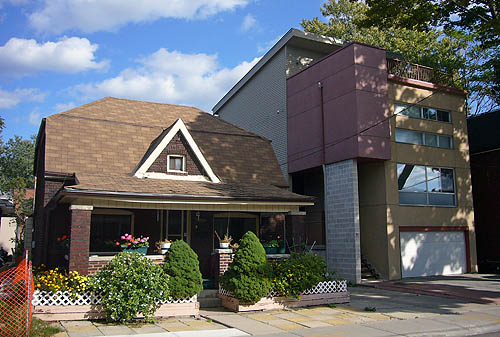 It’s so insensitive to its context – 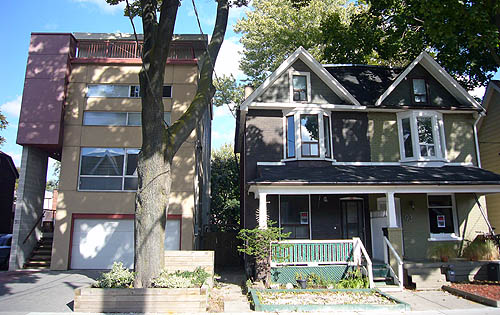 – that the owners clearly don’t understand that the paint and stucco colours, beige and red, look exactly like a really cheery social-housing block’s. The glazing is a bore; breaking up the top windows into thirds isn’t fooling anybody.

The house has a pronounced projecting mass over the recessed entranceway; it is surely uninhabitable and it looks like it’s going to crush you, too. The roof deck is indifferently finished, and the house apes the worst aspect of monster-house architecture: The first thing you see is the two-car garage. The paved driveway amounts to front-pad parking without a permit.

How soon before the tiny surround and the impermeable, dense-packed paving stones kill off the only vegetation on the property, that mature tree and the tiny shrub next to it?

The whole house seems more suited to an Arizona retiree with more money than taste. With its arrogance, exaggeration, and obliviousness, 97 Knox is a far worse house than any of the crumbling, leaning-over shanties that are its neighbours.