Where, exactly?
66 Walpole Ave., off Greenwood north of Gerrard
Who owns it?
Toronto Community Housing
How many units and residents?
179 and 212
Architectural and building history?
Opened in 1993 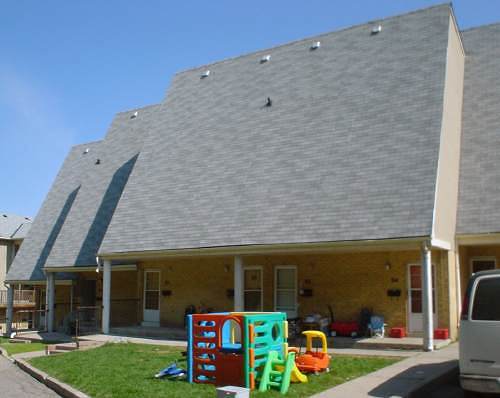 JOE: Well, this took forever. Anyway, this is the legitimate American-style ghetto that is somewhat out of our remit off Greenwood north of Gerrard.

IAN: But we’re doing it anyway.

— That’s the spirit. So you drive up Greenwood and, just as the road dips to let the train tracks go over, to your right is this mystery road that does a 90° turn and becomes this row of almost identical houses on Walpole.

— It’s more than a row, though, but it’s completely dead-ended, though. It doesn’t integrate with the rest of the streets at all, though, does it? Is that correct?

— This street is the backside of a large compound. This is the worst part of it. You can go through a walkway that I have a picture of there, and in theory the road loops around. We’ve been there.

— Didn’t we have trouble getting out? In the car?

— No, we were looking for a development we could see but not get to because there were these Italian-style invisible twisting roads between us and it. That’s the walkway.

IAN: Do you know if the other units in the project are social housing or not?

JOE: No, but probably. I don’t think it’s mixed-income. So we’ve got two phases to look at here: The northerly street, with the giant angled roofs, and the north-south street with the projecting additions and all the cracks and so on.

— When you look at this view, whatever it is, in thumbnail and from the main street, Greenwood or whatever it is, I always thought it looked really interesting with this massive roof and it made it look like the could have been doing something quite different with the levels and so on inside. And the contrast when you see it up close is remarkable; it’s just horrible.

— I kept looking at those thinking they were gonna be solar panels. But then you get there and it’s just one angled roof after another.

— The roofs themselves are, what, 2½ storeys? Massive. There’s nothing on them except roof vents.

— Which at least are all in a nice line. The shaded entryways seem like they’re covert or hiding from something.

— Yeah, it does. There’s too much shade.

— Oh, and there’s no interaction – there are just these solid doors every twelve feet. No windows, nothing. And it’s strange, but the inhabitation that you see is not on the porch.

— It’s monoblock chairs out on the street, almost.

— Extremely exposed pavement sidewalk. Also the little play structure and the tiny little bit of greenspace. But nobody is using these porches as a hangout, and who can blame them?

— The first time I went there was a hot day and I just walked in and just took my pictures. There were only a couple of people out. And on the way back, after I went past the other street, a cop car came racing up the ramp-street there and I wondered if one of the poor people had ratted me out because I was taking pictures. And I was totally conspicuous in my purple hat and everything. I thought I was a goner. Then when we both went there, it was one black family after another, except for the Indics or Arabs at the end. And they were looking at us with a lot of curiosity.

— Because of the colours they used and the amount of pavement, it’s glaringly bright and uncomfortable. Look, it’s more inhabitation.

— These little boxes protruding from the second floor. First of all, they look like they’re gonna fall off.

IAN: Wait a minute. Huh. Look at that. Under these... what you’re calling boxes (I’ll call them sunrooms), you can see the joists are all exposed.

JOE: So they are.

— But it doesn’t look pressure-treated; it’s open to the weather; and they’re not being held up by these spindly little columns on the balconies, so they must be cantilevered. You could actually be right. They may indeed fall off. Although it looks kind of like a pleasant space to be in. Wow, that is like... that is scary.

— No, I’m talking structurally. Anyway, the sort of general gestalt is kind of alienating and barren. Despite all their little efforts with balconies and fake porches it doesn’t feel – there’s no sense of inhabitation. ANd there’s certainly no sense of individual use. And I think that’s easily proved by the fact that nobody uses the porches, for example.

— Even on that one that has three levels of balconies. Then again, it has almost as many satellite dishes, which implies a lot of tenants.

IAN: Yeah, I mean, how do they get to their units? It seems like they’re sort of row houses, right? But they’re not; they’re vertically separated as well. But there’s no clear main entrance.

JOE: Nice little globe streetlight, though, which probably gives them the lighting of a 20-watt bulb.

— The other thing to mention is that it’s just off the beaten track enough to be functionally the same as if it were really remote. Just that little street off Greenwood is enough.

— But I was going to say that there’s nowhere to get groceries.

— No, if you’re going to make a sort of mini-community, you’d better have the amenities and you can at least try to make it look like it’s functioning.

— Yes, that walkway. It’s not clear where it’s gonna take you.

— I like it, though, except the massive City of Toronto light.

— No, but where is that really going to take you?

— I like this. It’s green and interesting. You’re right. You can’t see what’s at the end of the path at all. There’s no hint that there’s a project back there. Looks like it’s leading to a park. Where is it leading?

— So essentially that pathway is the escape hatch for the angled roofs. You go down that path to get to the legitimate street, which, by the way, there are normal houses on farther down. You don’t go up it; you only go down.

— That’s not possible, Joe, unless there’s a turnstile.

— Well, I think not knowing where you’re going to end up is the same as a turnstile.

— I think the real problem with this place, and it’s a big one, is the quality of the building.

— Yeah, we haven’t even mentioned the cracks yet.

— Yeah, it’s just a monumental disrespect to the people that are living there. It’s like these stories of the British housing estates from the ’60s that leaked. It wasn’t built to last. It’s not being properly maintained. Anyway. Your pictures show it, but you and I saw many, many more examples of repaired cracks – some unrepaired – in the masonry. In fact, I would hazard a guess that the stucco is a later addition that was put on to hide the disaster of the brick. I dunno. That looks more like concrete-block size. I apologize; it’s block under the cement.

— I thought the stucco was hiding the faults with the brick, but you can tell by the size and shape of the cracks that it’s concrete block under the stucco. God, everything is fucked. Look.

— All of the concrete has to be repaired. I bet the foundations leak. I mean, there are signs of patchwork everywhere. We’ve already talked about the seemingly-rotting balconies.

— So which is worse, being warehoused in a ghetto or being forgotten? Because this building, unlike the others we’ve done, is unknown.

— Yeah, I agree, and you wonder why someone in the press or the residents or somebody hasn’t gone to the press.

— Well, this landlord’s repair problems are well known. Toronto Community Housing? It’s like a billion dollars or something to fix all their buildings.

— I mean, who gave them the money to build this crap? Or rather, who approved it? What’s this little parkette here?

— I don’t know. I thought it was just the side of the hill, which, by the way, ends in a fence. You’re fenced in on the north.

— I was going to say at least it’s green space.

— Yeah, it’s a lawn on a hill. So you can barely use it because everything rolls down, like your tricycle and your ball and your child.

— More damage control at the foundation.

— That green space should be gardens.

— And somebody lives down here. It should be terraced; it should be a little play area. I mean, if it was as connected to the neighbourhood, it wouldn’t be a problem, but if you’re going to isolate this project, you’ve got to provide amenities. I just think it’s, you know, notable that this kind of interesting-looking concept of this massive backsplit huge-roofed townhomes was actually, you know, a complete failure. Spit in the face of the people that live there.

— Do you think these people actually know each other and like each other or are there simmering resentments?

— What other choice do they have? You have to practically take a plane to get anywhere else. Or, you know, a helicopter.

— Yeah, but what if you really can’t stand each other. What if you’re the only Indic or Arabic family there, and everybody is black?

— How’s that different than any densely-packed neighbourhood/community?

— Because those other ones are real neighbourhoods and communities and you can get out of them.

— There’s escape routes. There’s escape possible. Well, probably wouldn’t be very pleasant. You know, it’s like somebody is trying to make a political point with their lack of design and lack of quality in construction and planning principles, as if these people all deserve to live with each other, you know? Heaven forbid they actually noticeably intrude on the middle-class neighbourhoods behind them.

— Well, behind them is north, and on Athletic Ave. or whatever it’s called there’s a large stone signpost in the British style wrapped around the streetcorner just above the curb that says “Old Riverdale.” So yes, that’s the extreme end of what we know now as Riverdale. But there’s an impassable fence between them and Walpole. And the rest of their neighbours are dumpy streets around Little India. There are only a couple of really good streets in Little India, and these aren’t them.

— Even Little India isn’t accessible from them. It’s an island.

— You can’t even get to the B.J. Supermarket.

— The way they used to treat the insane in the Middle Ages walking a wheel incessantly – making these people kind of go round and round this horrible little....

— Do we have anything good to say at all?

— Its people are afraid to be outside. You’re so exposed. Except on the other side, where I don’t have pictures, where it’s deeply in shadow, and I did see the occasional wigger “hangin’ ” there.

— I like the fact that there appear to be some individual entrances to units, either slightly below grade or up onto a balcony. But it’s hard to make out where the units are divide, where the real entrances are to the upper units, if there are upper units. Anyway, in what way is that not a motel, besides the massive roof?