Where, exactly?
970 Eastern Ave. just west of Woodfield, across from the Securicor lot
Who owns it?
Mainstay Housing
How many units and residents?
14 units; number of residents unknown
Architectural and building history?
Unknown 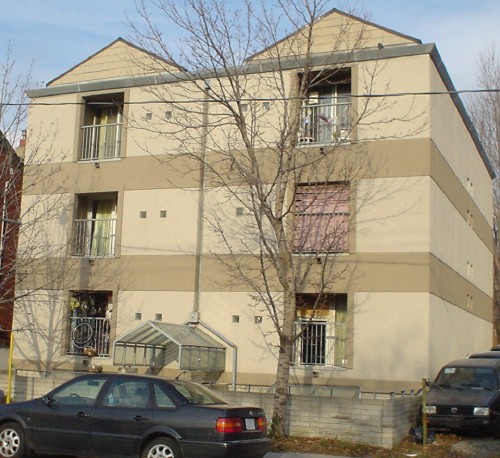 IAN: Do you got more pictures of it?

— Can I see the two? You don’t have to write that down. What are you writing that down for?

— It’ll be more amusing to read. That’s the entrance. I am not kidding!

— Nasty, nasty! It’s like an entrance to catacombs or something. 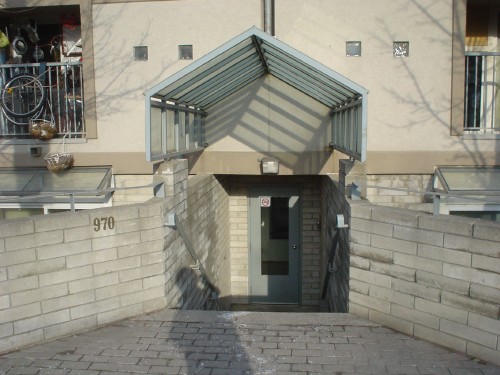 Sunken entrance. “Welcome to my parlour”

JOE: And those are actual apartments on either side. They have their own bunkers, like some kind of science-fiction scenario in which poor humans are put in a maze and observed by overlords from up top. I’ve walked by there in the summer and watched people at barbecues in these little prisonettes.

IAN: That’s a unit behind that wall, right? It’s awful, awful. All right, this building would be considered postmodern if it’s considered anything. Why do I say that? Well, the striping, the windows, the gabled roof.

— And what’s interesting is how poorly it relates to the little house next door. What street is this?

— Eastern, which is your problem right there. It’s a traffic sewer. It’s really uninhabitable by humans as far as I’m concerned.

— And the building looks that way. It really looks like it’s trying to protect people from Eastern Avenue and the area around.

— Oh, but it gets worse, because I’m sure you’ve noticed that every window has bars on it, even the third floor.

— Are those balconies or bars?

— Well, OK, so the whole window isn’t barred off, but like the impression on the whole is that it’s a fortress, right?

— Oh, yeah, sure. The entrance is fortress-like; the main-floor units are behind a thick, very menacing wall.

— It’s like the wall the Hell’s Angels have in front of their doorway, which also has bollards in front of it that are sometimes camouflaged as planters. There’s the Securicor headquarters right across the street. It’s as though they expect some asshole in an armoured car to drive right into it.

— Or the police with a battering ram.

— I mean, I don’t know much about architecture, but really, every time I’ve looked at this building I’ve thought it was generating some kind of psychological warfare for the people inside.

— And to the people around it.

— No, because what I’m saying is it’s overstating the problem. It’s overkill, kind of. The problem on Eastern is cars, not like urban gangs or something. Because we’ve got the Hell’s to take care of them.

— OK. Look at the entrance again. That’s almost a cartoon. That’s like a cartoon of a prison or a castle where you have to enter via a tunnel. Nothing helps. The little canopy doesn’t help. The single door doesn’t help. And the fact that you have to go down doesn’t help. Even the light looks, you know, completely institutional.

— And it’s staring you in the face as you start walking down the stairs.

— It’s like if you fall into one of those pits, there’s no way out. Because the windows are locked and you have to climb a giant retaining wall.

— And notice how some of the refuse from the first-floor balcony is hanging over the skylight for the place below. When people stuff their balconies like that, it’s a sure sign the building is not working in terms of habitability. 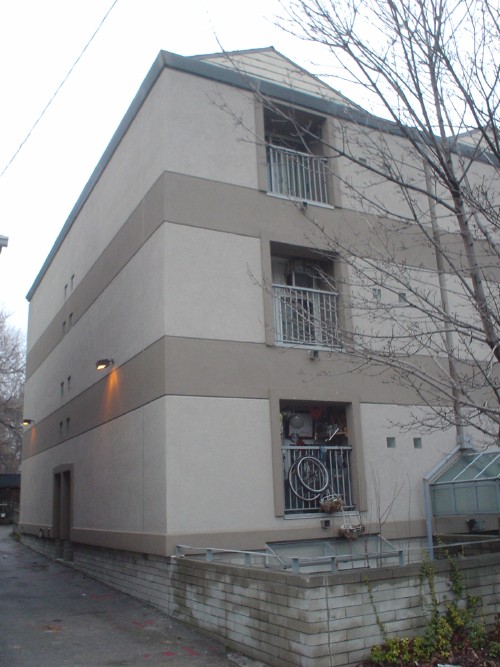 JOE: Or they’re overcrowded. They’re so poor they have too many people living in there.

IAN: Yeah, that’s possible. But really, every suite gets the one window, which is recessed, barricaded....

— And unreachable anyway. If you tried to scale that wall you’d fall into one of the pits.

— Do you know what group make up the residents here?

— Uh, nope. But it gets better. We have the exact same building on Coxwell.

Scene from the class struggle 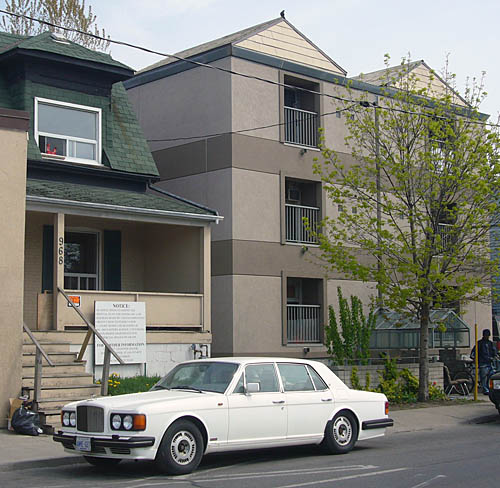